How to make the most of your data

Gephi is a reference for the visualization of networks. It can become much more.

1. The first usage of Gephi is probably to, well, download it, install it and work with it. Simple, that’s how we know Gephi: 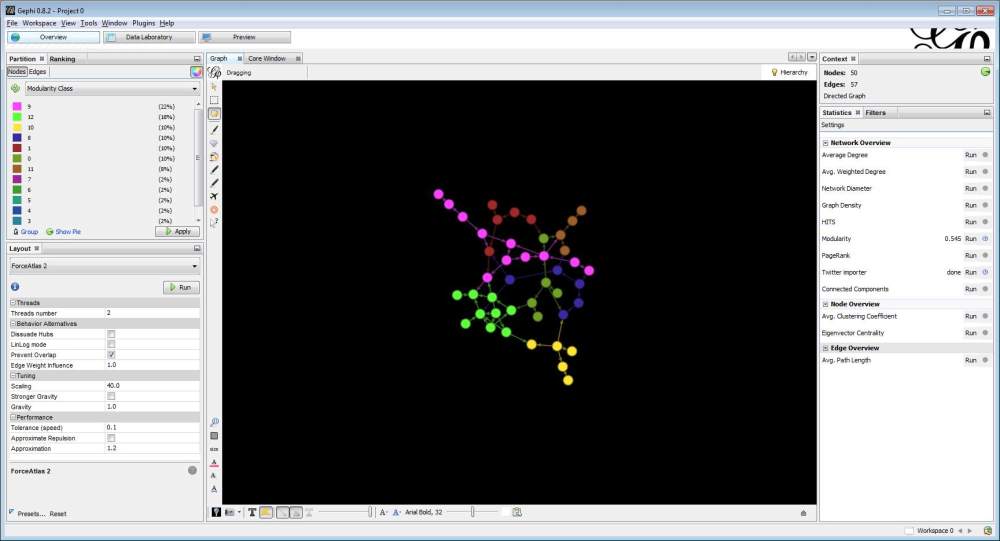 2. On the Gephi website, we see that a second use is possible: download the “Toolkit” version of Gephi.

This toolkit version of Gephi is made for programmers: there is no “window” appearing or anything, just pure code to execute Gephi functions automatically and repeatedly. For example:

– export the picture of the network to pdf.

As the activity of the Gephi forum shows, there are many users who take Gephi this way.

Plugins are basically little modifications that add  missing functions to Gephi. As a user of Gephi you probably ran in a situation when you wished this or that stuff could be done in Gephi. To name some:

– add a map as a background

– replace nodes by pictures, or any shape

– run you prefered networks metrics, not present in the statistics panel.

Gephi plugins can be written to do all that, adding all the functionalities that you need and which are not originally present in Gephi. Actually, many plugins have been written by individuals and firms to meet their needs, and they shared these plugins publicly. Anybody can  install these plugins directly from Gephi:

When a plugin you chose is installed in Gephi, they are integrated perfectly so that you see no difference with the original functions of Gephi:

These plugins are also described and cataloged in a convenient way here: https://marketplace.gephi.org/plugins/. I personally developed 2 public plugins: one to sort isolated nodes alphabetically, another to apply a 3D layout. Certainly, many plugins have been written by firms for their inhouse needs.

4. Now, I really believe that Gephi is ready to develop into a 4th flavor: Gephi as a data visualization platform. How?

Gephi can be extended with plugins, we’ve seen that. The thing is, Gephi is itself made of plugins – that’s not a monolithic piece of written code. Each part of Gephi has the flexibility to be modified and extended. So that by creating new, elaborated plugins you are not just adding some minor features to Gephi – you actually transform Gephi into something quite new. Two examples:

– displaying some barcharts in Gephi? Easy:

The barcharts above are made possible simply by adding a new plugin to Gephi (tech note: based on JavaFX. Example above was integrated in Gephi in 15 minutes following this tutorial).

But that’s just the beginning. I suppose that just like many others, I often face the Cornelian dilemma: web-based or desktop-based viz? You can actually include webpages into Gephi:

That’s the New York Times front page here, but let’s think of javascript based data visualizations – a d3.js viz why not: 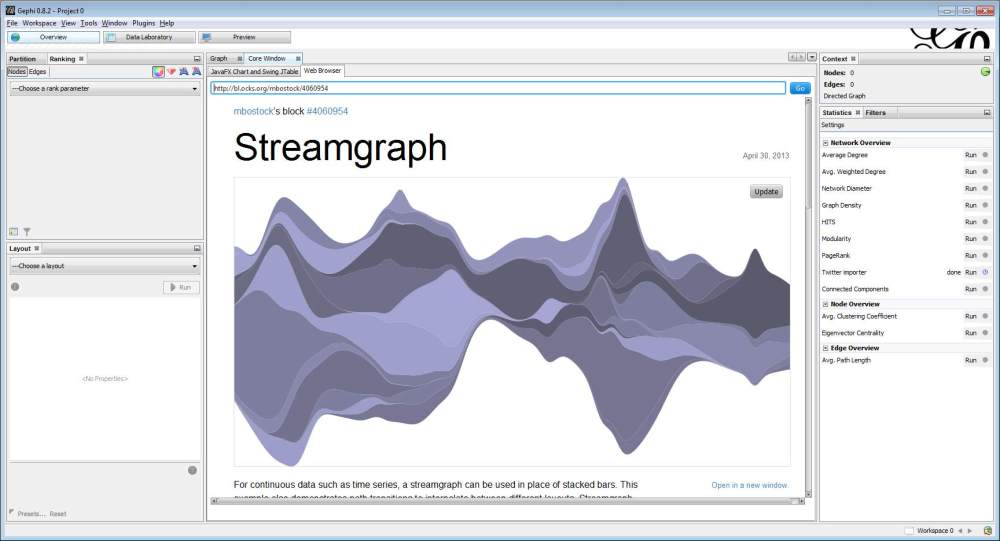 There are some limits in terms of performance for web-based viz inside Gephi, but the screenshot above shows a perfectly functional and interactive d3js example inside Gephi. Think that it is possible to generate and load these viz from local js files based on local data…

In short, Gephi can be seen as a free, open-source, well-architectured data visualization platform – not just a network viz app. With the liberal license model chosen for Gephi (free for integration in commercial apps), this is surely a very effective solution to be explored by companies and data-vizzers in general.

One thought on “Gephi – the possibilities of a data visualization platform”